The Sunday before Christmas 1991 dawned bright and crisp, and our city was a glistening Christmas card after Saturday’s snow storm. Noisy snow squeaked underfoot as I trudged hurriedly to the entrance of the church.

I was the worship leader and running late. I had dawdled way too long at home, mulling over whether or not I should start the service with the story of my first Christmas after my sister went to Heaven. Now I discarded the idea. The day was much too pretty to spoil with thoughts of loss. 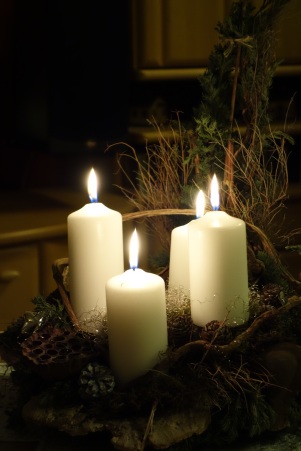 My sister had left us in 1985. As Christmas approached that year, I went through the traditional preparations—shopping, baking, choir rehearsals—with stoic deliberation, forced cheerfulness, and a wooden heart. Nothing comforted—not the lights, the music, nor even the excitement of my six-year-old daughter. I knew I would never again enjoy the season.

Then I picked up a magazine and read an interview with Evangelist Oral Roberts and his wife, Evelyn. It told how God had comforted them the first Christmas after their daughter and her husband had died in a plane crash.

As the Roberts’ read the Christmas story, they remembered that long ago God had suffered a loss, and He, too, had longed for His children. On that very first Christmas, when the angelic choir rejoiced at the birth of the Christ child, it was because God was about to get His family back.

I held my breath as I read. Slowly, two thoughts began to emerge from the fog of my grief: first, God understood how I felt, and He grieves with us when lives end too soon; and second, part of Christmas’ promise is that we, too, can someday be reunited with those we love.

Simple thoughts to have had such an effect, especially since they weren’t new to me, but somehow, presented in the context of Dr. and Mrs. Roberts’ pain, they began to heal my own broken heart and brought light into my dark place.

Now, six years later, I entered the church foyer and found it filled with laughter and chatter as people stomped snow from their boots. The holiday spirit followed the congregants into the sanctuary and minutes later everyone smiled up at me expectantly as I stood to begin the Christmas carols.

Everyone, that is, except for one visitor who sat alone at the back. As it turned out, it wasn’t her norm to attend church, but when she woke up that morning she asked her husband to help her find one. Any church would do. He shoveled their car out from under the mountain of snow that buried it, and drove into the city.

During the service—her words choked and broken—she told her story to two women who had noticed her tears. She told about a drunken driver and the young son, her long-awaited only child, whom she had lost in a moment just weeks before. She told about a school lunch still in the refrigerator, of small jeans and shirts that waited to be ironed, of Christmas gifts still wrapped and hidden. Her heart was broken.

As I heard about it later, how I wished I had started the service, as I had felt prompted to do, with the story of God’s own heartbreak! Surely, God had wanted me to reach out to this wounded woman with His love, but I hadn’t.

Not a Christmas season goes by that I don’t think of that lady, the Roberts family, and my sister; and again, in the midst of music, lights, and laughter, I’m in awe of the God who still longs for His lost ones and pursues them with His whole heart.

There will always be sadness in our world, but I will always celebrate Christmas. I will relish every minute of being with family and friends. I’ll enjoy the lights, the music, and the food. I will rejoice for Jesus’ birth and celebrate the promise of eternal life that Emmanuel gives, because “God sent not his Son into the world to condemn the world; but that the world through him might be saved” (John 3:17).

Angels sang and celebrated that first Christmas, and I imagine Heaven still celebrates, and probably still with angel choirs singing. I can almost see it: family and friends gather, stories are told and retold, and laughter fills the air.

I’ll celebrate with them again this year. I’ll be thankful for the precious light of truth that shines to brighten every new day.

May we all have a Blessed Christmas, and a New Year filled with His peace.