There are so many cares, issues, and problems that come up in life. Most of them, thankfully, are little things that matter to no one but us. In fact, in the grand scheme, they probably aren’t even important to us, even while they fill our thoughts and take our time. However, those little things can turn into God-stories. In Chapter Two of Keepers of the Testimony, I wrote about some of my mother’s God-stories. Big stories and little. One of my favourite “littles” was about when the septic tank was in trouble. She told my father about it, over and over, and he was too busy to take care of it. One morning, she prayed in frustration, “God, I’m not talking to him about it any more! You’re going to have to take care of it for me!” A few minutes later, my father came in the door and went to the phone. Picking up the receiver he told my mother, “I have to call (so and so) about that septic tank.”

The other day, I found myself in that same position: at my wit’s end, with no help in sight.

But, oh, that chair! Because its leather was so lovely and soft and, to me, fragile, I decided I needed to be its saviour every day of its life. Since we ate breakfast out there pretty much every morning, I made sure it was covered, always, with a throw, to protect it from breakfast crumbs. Husband was warned to be careful with pens if he was going to review students’ papers in that chair. Also, his clothes had to be in perfect condition whenever he sat there; no sitting with after-workout clothes on. And be careful with that coffee. And was that jam on his toast?!

He deserved that chair, but I’m not sure he enjoyed it. 🙂

And then I ruined it.

I went to a new hair stylist. Before she picked up the hair dryer, she rubbed her hands with a new product and mushed it into my hair. “Is that oil?” I asked, too late, since it was already done. “It is,” she said. “Is that okay?” I said yes, but I was wrong. So wrong.

A couple of days later, I noticed an ugly head-shaped dark brown stain on the back of Husband’s chair. 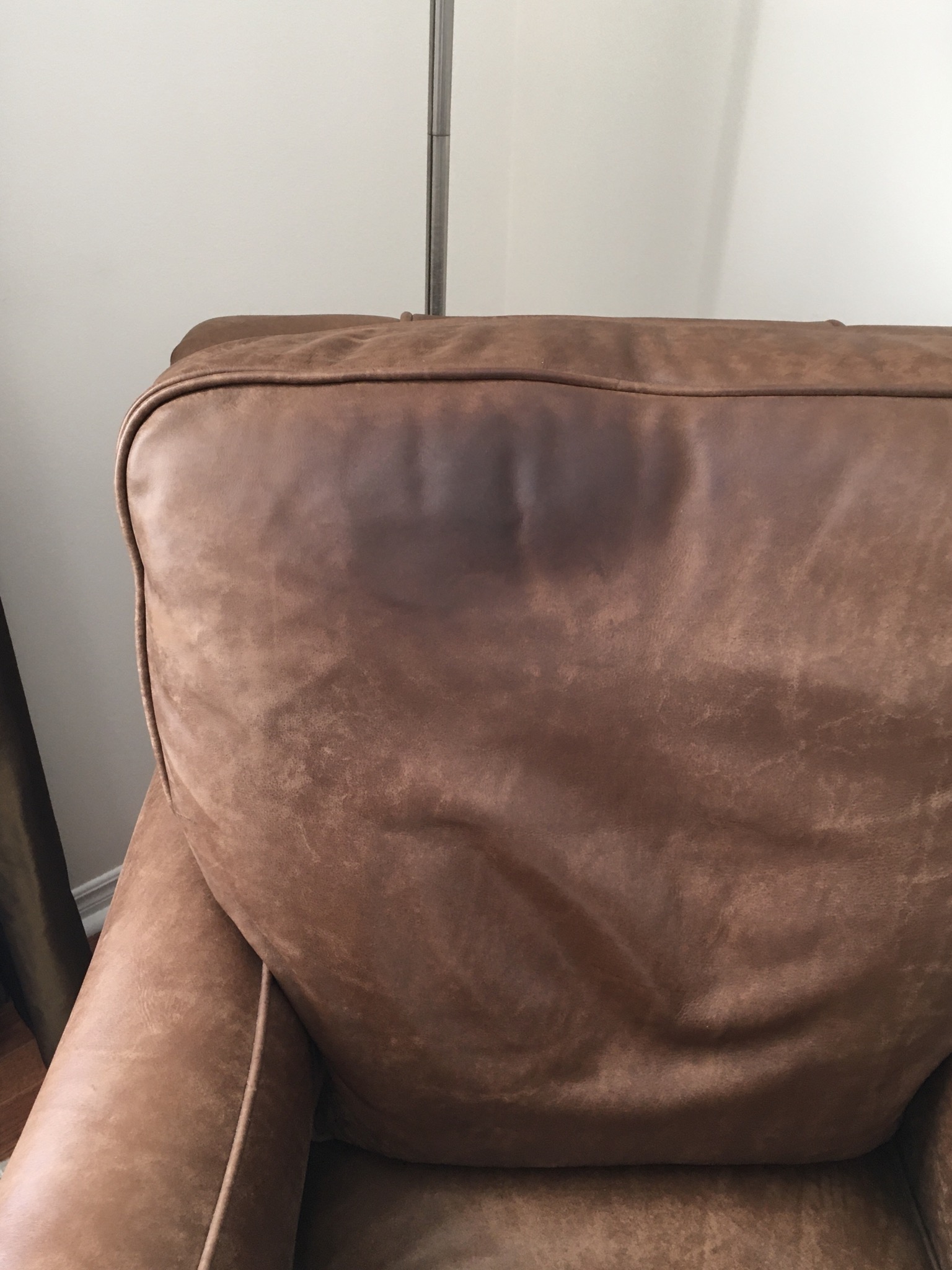 Husband had to be the culprit, I decided, because I was careful, always so careful. And then I realized he was too tall to rest his head in that spot. But I was just tall enough. And I remembered the oil.

I had ruined Husband’s chair!

We had bought insurance on the chair. (It was the first time we had ever bought insurance on a piece of furniture!) I called the agent, who informed me that hair oil was not covered, but they would send someone who would try to fix my problem. He arrived, he tried, and made it worse. And bigger.

“I’m on my own, then,” I decided, and turned to the all-knowing internet.

“How to get oil out of leather“

After several days of rubbing the stain with corn starch, letting it sit for several nights and vacuuming it off the next morning, it didn’t look any better. Just bigger. Next came three attempts at scrubbing with saddle soap, as per the internet gurus’ advice. That didn’t work either; it just made the soft leather harden.

Through it all, Husband was kind. After every failure, he said, “It looks better, really,” but sadly, and unconvincingly.

I was undone, and done with it. Every morning I had entered the front room hoping that, during the night, some miracle had returned that blessed chair to it’s original beauty. But there it was, just the same, its dark stain mocking and shaming me. Corn starch, saddle soap, insurance, and internet had all failed me. There was no help to be had. A brown throw would have to hide my shame.

Then, I remembered my mother’s septic tank!

Later that day, as I drove past the furniture store where we bought the chair, the thought popped into my head, “Go in and ask if they have someone who fixes leather problems.”

The store is my happy place. They know me well there since I visit often, just to look. One of the salesladies listened to my sad tale, dismayed at what I had done. “Oh, I remember that chair! Oh my, how awful!”  I was not to worry, she told me, because she had someone who would take care of my problem. “Brian will take care of you!”Apparently, Brain would call the insurance people or email them a stern message. I told her I wasn’t looking to involve the insurance company because they didn’t cover oil stains, and that I would happily pay someone to fix it. “Don’t worry; we’re going to take care of you.” My eyes filled up at the presence of kindness and new hope. Then Brian stuck a pin in that hope. The insurance company was a no-go, as I thought it would be; he wouldn’t even try because of the non-coverage, and even though the store’s “leather whisperer” might help me for a fee, he probably wouldn’t be able to get the oil out, and no one can add colour over oil. The eyes filled up again.

I called the Fixer, anyway.

“Text me a photo,” he said. “Yes, that’s oil saturation. See if you can wrinkle the leather.”

I could and did. A small line of the lighter colour showed up. I texted a picture of that.

“Do it again. Massage the leather. A lot.” That was all he had.

And I watched my miracle appear before my eyes. With no charge.

I know, I know. It’s just a chair. How important is a chair? Not much. What is important is God’s part of the story, the part that sits in our computer-brains and pops up just when we need it. But first we live them by simply believing what he said, and asking. And then trusting. When we read the Bible’s God-stories, those that involve people, we find that’s just how they begin. Our God-stories, even the small ones, are the Ebenezer Stones of our lives. They become monuments that speak to us of the lovingkindness and faithfulness of God, so needed during those times when we are facing something much more important than a damaged chair.

Dear friend, if our Father would help with that silly little care of mine, or with your little cares, how much more does He want to take that big care you might be trying to carry today?