Have you ever wondered, “Seriously, what’s my problem?”

At some time, for some reason, maybe you have questioned why you act or react in a certain way, and do it over and over again. Or maybe you have wondered where your joy went, or your passion, and why it left. You used to be much more relaxed. More easy going. More fun.

This might mostly apply to those of us of a ‘certain age’, but I doubt it. At any age—no, at every age—we are targets of the arrows Brent Curtis and John Eldridge wrote about in The Sacred Romance. Arrows that we carry our whole lives, some of us, without knowing it.

We might notice the dull, almost imperceptible pain that we carry every day, but we might not recall where or when or why it started. If we did, we might be able to identify the rejection, failure or loss that over time has convinced us, “You just aren’t good (smart, cute, cool, rich, brave) enough.”

Arrows and their side effects show up in the strangest places and in the most unexpected ways.  A couple of years ago, I spent a weekend in a hotel outside of Boston. I had accompanied my husband who was at an academic conference at a university close by. Unfortunately, he hadn’t checked to see where our hotel would be, even though I had asked him to. Unfortunately, it turned out that our hotel was out in the sticks–as far as I could tell. So, here I was, bored because of the rain and drizzle that I refused to go out alone in, and irritated with my husband because, well, I was spending a weekend in a hotel. In the sticks.

I had long ago stopped going with him to those conferences, but this time we were planning to drive on to New York to visit family after the conference. So here I was, watching HGTV, show after show after show. When I couldn’t bear it any more, I turned off the television and opened my Bible. I was that desperate.

I found help in Ephesians.

Actually, I found correction. Not quite the help I was hoping for. 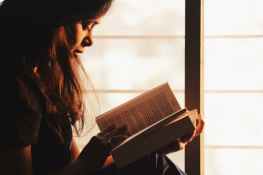 Correction is a bad word in some of today’s church circles. And for good reason, perhaps. It isn’t helpful for us to live in a continual state of belly-button observation and self-flagellation. We can get addicted to that. Feel better when we’ve beaten ourselves up.

But, well, sometimes you need just the kind of help I found.

I read as far as Ephesians 4:31. And, as has probably happened to most of you more often than you can count, the words jumped off the page.

“Let all bitterness, and wrath, and anger, and clamour, and evil speaking be put away from you…”

Self pity said, “Huh! What would I have left?”

But because the “washing of the water of the Word” was a well known concept to me, and I obviously needed washing, I decided to read it again. And again, Couldn’t hurt.

Finally, I prayed, asking for help with the putting away and letting go because I would need it. Letting go doesn’t come easy to me.

It was Sunday, and now that I was rousing from my rain-and-drizzle self-pity induced funk I decided to hunt for the church just about 30 minutes from where I was, where a couple of my daughter’s friends attended.

Imagine my shock when Pastor Jonathan Del Turco, lead pastor at International Family Church in North Reading, Massachusetts, opened his Bible and said, “Today, we are getting rid of the root of bitterness. Turn to Ephesians, Chapter 4.”

You talk about nailing a point home! I should have been thankful and hopeful right then, but I was actually nervous. What if this was a waste of time? What if I just couldn’t…whatever?

That sounds weird to me at this point. Since then, I’ve learned that our feelings of inadequacy, shame, fear–which often result in bitterness–are born of our thoughts, which themselves come from something we strongly believe. Sadly, that brings us back to those arrows that often leave us with some deep-seated wrong beliefs about ourselves, our lives and our relationships.

But my real problem, my core issue, was bitterness. And the writer of Ephesians told me bitterness needed to go. I needed to “put it away” from me. Bitterness wasn’t a righteous response to evil. Even though I may have been bitter because of real, unimagined painful and maybe even deliberately hurtful events in my life. Maybe even bitter because of disappointments in myself and others. But there were no excuses left. Bitterness was not a friend who would protect me from further pain; it was an enemy that had to go. And, according to Ephesians 4, the “putting away” was my responsibility.

When the pastor had us pray together at the end of the service, I prayed with him. Honestly, I was a little skeptical that a simple prayer with the pastor would help, but in the days following, I wasn’t the only one who noticed a difference. My daughter mentioned how much more relaxed I was than usual during the visit. I noticed it as well, and although I was sad that she had noticed how unrelaxed I had been before, I was thankful to be free. Thankful that she was free of my bitterness as well. Bitterness spreads out its roots and harms others.

Did Jesus love me even though I was bitter?

Did he walk away in disappointment or disgust?

A thousand times NO!

But he didn’t stop there. He didn’t stop at loving and accepting me. Because he wanted me to really and truly live the freedom he shed blood for,  he gently led me to it, when I finally asked for help on a soggy weekend on the outskirts of Boston.

And he still does. Still leads. Sometimes he leads with a still small voice; sometimes he makes words jump from the page; and sometimes he puts words in a pastor’s mouth.

But it’s never to make me good enough. It is to make me free, one arrow at a time.

When we look back at the Cross, we know that he considered us enough to die for. Every human on the earth is of such value to him that he still pursues us and fights for our hearts. And when we accept him as Lord and Saviour, he still fights for us, and alongside us, to bring us to the freedom we were designed for.

“It is for freedom that Christ has set us free” Galatians 5:1.