I have been reading articles about contemporary praise and worship (if there is such a thing). Don’t get me wrong; I am not saying there isn’t.  I’m just saying that a few of the articles I have read suggest that there might not be — that “contemporary worship” is pretty much emotionalism, worked up by repeating, over and over, a line of some smarmy, probably nonsense-laden (devoid of any connection to doctrinal accuracy) chorus.

Am I overstating their opinion? It sure sounds like I might be, even to me, but that is the overall impression one might get from a few of these writers.

I remember, back in the olden days, when I was in my twenties, and perhaps even before then, I was singing songs in church that my parents called foolish. Southern gospel songs were the norm, perhaps viewed as the younger generation’s departure from the hymns of our parents’ years. My own parents hated the beat, the loudness of music, the guitars, and absolutely the drums. I loved my parents, but they were the True Fogeys, and I knew it.

Later, in my thirties, I became more sophisticated and sang songs that had a Jewish flavour, stolen from the Psalms and full of truths about God from the perspective of someone who, like King David, knew him well. The beat called for dancing and, happily, so did Psalm 150, and eventually we did. The joy of the Charismatic two-step replaced the heartfelt tears that accompanied beautiful old “Hallelujah” and other songs associated with the beginning on the Charismatic movment. We danced as David danced. 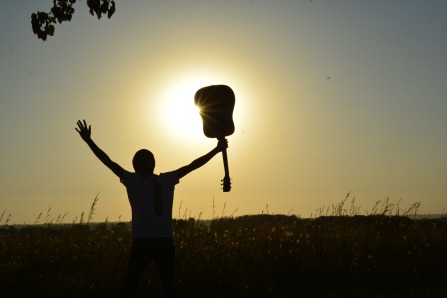 Those were great days. Change was exhilerating. The cutting edge was the place to be. From the Charismatic Movement to Integrity Songs (or were they the same?), from Word of Faith to Warfare, from Hillsong to Renewal, change has never stopped. How silly we were to think it would!

You have probably already figured it out, so I might as well confess it right here: I am one who misses the old hymns, not just the old Pentecostal/Methodist/Baptist hymns of my youth, not just the emotional Charismatic choruses and the faith-building WOF offerings, but also what I called Episcoplian hymns, those introduced to me during my stint singing in a choir whose director hated “barn-burners”.

Not that I would want a full diet of any of them; I would not! But the words of those old songs…! The words were strength!

And I guess that is what gets my writer’s knickers in a knot. The words.

Jesus said God wants, looks for, those who will worship him in spirit and in truth. If we look at the context of the conversation where he said that, we find he’s not just talking about honest, heart-felt worship here. He’s talking about worship that encompasses, springs from and expresses the truth of who God is. And He wants that because we need that. We need to know that truth and to declare that truth in our worship.

Much of our worship these days is an expression of how we feel. And that is good. Expressing our love and devotion is appropriate, needful. Can you imagine never being able to tell your children, your beloveds, how you felt about them? We should guard it, especially if we have come from a time and place where we had no emotion or it was uncool or inappropriate to talk about it.

But just to talk or sing about how we feel is not the “be all and end all” of worship. Our feelings change from day to day, sometimes from moment to moment. Sometimes we simply don’t “feel”. We sing the songs, but we don’t feel, and singing a lie at that moment rarely helps. What helps is to sing the truth. The truth about Him. And I have watched, heard, and felt the focus of a congregation, in fact the whole atmosphere, change when the words become more about Him than about us.

But not to me.

Words matter. What they say about God matters.